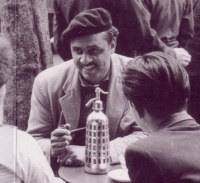 He and Peggy decided to move to Europe where they saw a better opportunity to fully realize their vision, free of the racism that permeated American life at that time. He contacted the Russian Cubist-Expressionist sculptor Ossip Zadkine who taught in Paris, France, and was invited to join his class of a dozen students.

In October 1949, they sailed off to Europe on the SS De Grasse.


In the context of his apprenticeship with Zadkine, he produced figurative works, solid forms with religious and classical themes, carved out of wood or made in terra cotta, that reflected the strong influence of his teacher.

Examples of terra cotta pieces created in 1950 include Salomé, Seated Old Man, the bas-relief A La Pensée (To Thought) and the Resting Gladiator.  Among the wood carvings inspired by Zadkine are Venus de Bois and Orphée (1951). Other wood carvings, such as Tree Spirit and Poisson Vert (1951), reveal the strong influence of African art.

During these first years, he paid frequent visits to Paris' ethnological museum the Musée de l'Homme. In 1952, introduced by Karl Appel, he was commissioned by the Kunstzaal Hamel of Amsterdam, Holland, to produce a series of masks, mostly in terra cotta and wood, for his first one-man show in Europe.


These masks, clearly inspired by the works of ancient artists, demonstrated both technical mastery and a deep understanding of the legacy of traditional African expression in modern art. A few of the works created in 1952 for that show are still part of his collection, including the Prophet, Mask #36 and Mask #58 in terra cotta; Orphée (Mask #34) in aluminum, brass, and wood; and Mask #35 in woods of different colors.

During these first years in Paris, he also began to create more abstract pieces made from different materials, including rope, wire, metal, and other miscellaneous objects he links together. The sculpture Bakota, which is in wood and copper, and the mask la Soeur (The Sister), which is in rope, metal, and terra cotta, both from 1952, are two examples of mixed media, modern abstractions with a strong traditional African undercurrent.

One of his peers at Zadkine's studio was sculptor Shinkichi Tajiri. Their friendship changed the direction of Harold's work as Tajiri taught him the art of oxygen-acetylene welding. At first Harold used the technique to assemble odd objects he found at the Marché au Fer (Iron Market).


1951 examples of these early pieces include Bird of Prey, Tete a Tete (One on One), La Femme (the Woman), and the Horseman.


When he eventually discussed this new technique with Zadkine, the latter tersely rebuffed him with the statement, “I do not teach plumbers”. The abrupt exchange was another a pivotal point in Harold's career. Soon thereafter, preferring a freer artistic environment, he took his studies to L'Académie de la Grande Chaumière, where he met Herbert Gentry, Ollie Harrington, and Beauford Delaney.

That summer he traveled to Majorca, Spain where he was inspired by the driftwood found on the beach. Upon his return to Paris, he began to integrate steel rods that he bent and flattened into his sculptures. This is the beginning of his Forest series - linear tangled works that uniquely followed natural order into abstract forms. One example of the first Forest pieces is the Forest (1951). By the mid- to late fifties, the Forests grow larger, as in La Foret (1955), Sculpture '58 (1958) and Sculpture '59 (1959). By 1959 variations on this theme begin to evolve into intertwined knots and dangling combs, such as Hanging Knot, Galaxie Suspendue (Suspended Galaxy), and Witches Comb. He also used rods for more figurative work, as can be seen in 1953 in Parade and Le Vieux (Old Man).

Another major event in the early '50s shaped the direction of his art when he met the daughter of Julio Gonzales and was profoundly taken by her private collection of her father's work. For many years the influence of Gonzales was evident in Harold's sculptures and he is recognized by art critiques as the “worthy heir” of the master. Works reminiscent of Gonzales include l'Homme aux Mains Sales (Man with Dirty Hands - 1952), Végétal Vibrant Doré (Plant Vibrant Golden - 1953), and Apollon (1956).

Through large group exhibitions like the Salon des Independents, and Salon de Jeune Sculpture, he developed relationships with Michel Seuphor, Anja Staritsky, Cesar, and Sonya Delauney. One of the first shows he had in Paris was the inauguration of the Galerie Huit (1950). This cooperative gallery stemed from an association of artists that included Paul Jenkins, Sam Francis, Joan Mitchell, Shinkichi Tajiri, Herb Gentry, and Oscar Chelimsky. Other close friends of the time were the artists of the COBRA group, Karl Appel, Corneille, and Hansma. Together this informal community constituted the European avant-garde, which was later to be be called `L'Ecole de Paris' (the Parisian School).

By 1954, he opened the Salle Balzac of Galerie Creuze on Avenue Messine with a two-man show in association with the Belgian-Dutch painter, Bram Bogart. Having a large expanse of space to fill in that gallery, he decided to create larger Forests and developed a new technique of pouring sand inside the steel rods to facilitate the heat transfer and prevent them from splitting in the welding process. It is after that particular exhibit that he begins to integrate hammered plates of metal connected by rods to add body and texture to his work. He coined the term `Plaiton' from the English “plate” and the French “laiton” (brass) to identify this original new series which would evolve over time into separate and distinct styles. 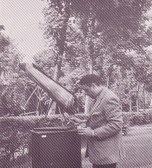 The first works of this series to emerge were characterized by overlapping vertical planes connected by linear horizontal stems. These sculptures often defied gravity, suspended in thin air or balanced on improbably narrow legs, and were always multi-dimensional.


KL-13 and Signal Plaiton in 1957, Plaiton Suspendu (Suspended Plaiton) in 1958 and Winter Plaiton (1959) are examples of these first Plaitons. The fluidity of both the Forest and Plaiton styles are the most recognizable in works like Obéron (1959), and culminated around 1960 with the emergence of the Gothic series, such as Gothic Plaiton (1961) and Gothique Plaiton Arc (1965), named after the oval shaped arches prevalent in European architecture following the Roman period ( which is defined by its uniform round arches).

Besides the Plaiton style, Harold continued to integrate sheets of metal and rods into distinctive shapes. A masterpiece of the time is the King of the Musicians (1955) with its shield-like front plate, reminiscent of African warriors, while fluid rods reflect the motions of a classic music virtuoso, and peculiar objets trouvés (found objects) crown the top the sculpture.

During this decade, while his popularity in Europe soared and expanded beyond the borders of France at a rapid pace, he maintained a significant presence in the U.S. art market where he had several important shows and sold works to private collectors and public venues, such as his alma mater, Howard University.

In Europe, he participated in multiple group shows and salons. Among others, he had several more exhibits at Galerie Creuze with contemporaries, including Antonio Tapies and Oscar Chelimsky. He developed a strong following and took part in numerous other artistic ventures, including appearances in U.S. State Department documentary productions and taking on the role of artistic director for Monitor Productions, an international film consortium. He was also guest speaker at the Sorbonne University of Paris and was featured in widely-read American and international magazines and revues, including Ebony Magazine in 1953.